Hope Technology began life in the late 1980’s as a subcontract machining business making tools and fixtures for the many local aerospace companies.
In 1989 they began making disc brakes for the newly developed mountain bikes.
Initially for the personal use of the owners Ian Weatherill and Simon Sharp but they quickly realised these brakes could be sold as a product in their own right.

Since disc brakes were such a novel idea on a bicycle they decided to begin manufacturing other more common bicycle products, the first of these being a front hub.
These began selling through retailers in the UK and interest was also shown in many countries around the world.
Over the subsequent years many more products were added to the range and in 2000 the decision was made to stop all subcontract work and concentrate purely on bicycle products.

Hope now manufactures almost every part for a bicycle including hubs, brakes, headset, stems, bottom brackets and lights.
The only major part left to develop is the actual frame, which may be happening in the not too distant future.
All parts are proudly manufactured in Hope’s Barnoldswick factory which is a true state of the art facility.
They have almost 100 staff operating the factory 24-7, running the 55 CNC machines, anodising the individual components and hand assembling the finished parts.
Manufacturing all products on site gives Hope total control on quality and delivery schedules. 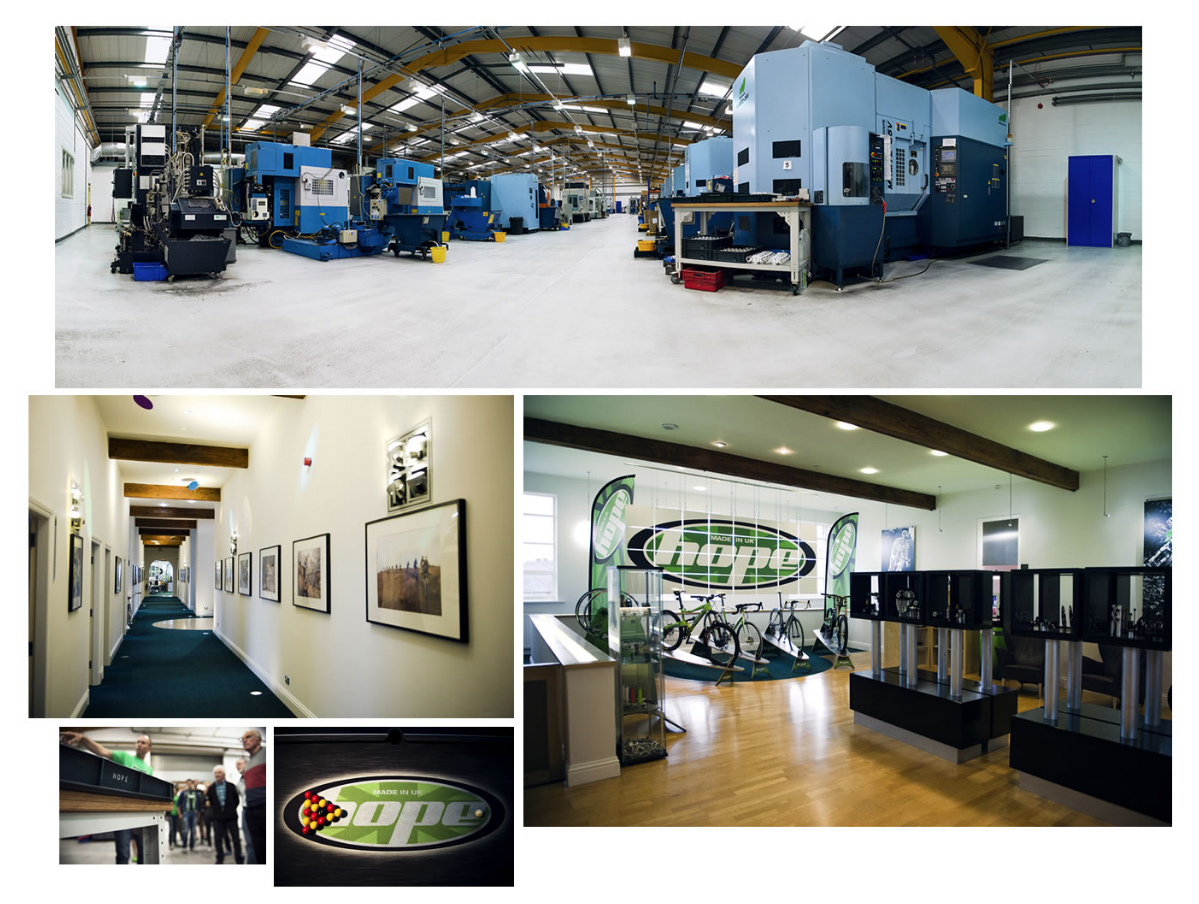 Hope exports around 50% of its production to over 40 countries.
They deal directly with retailers in the UK, France, Germany, Austria, Belgium and The Netherlands (employing French and German speaking staff), then have distributors in many other countries.
Their components have an excellent international reputation for both quality and reliability.
They are generally fitted by enthusiasts looking to upgrade their bikes to the highest levels and are supplied through specialist retailers. 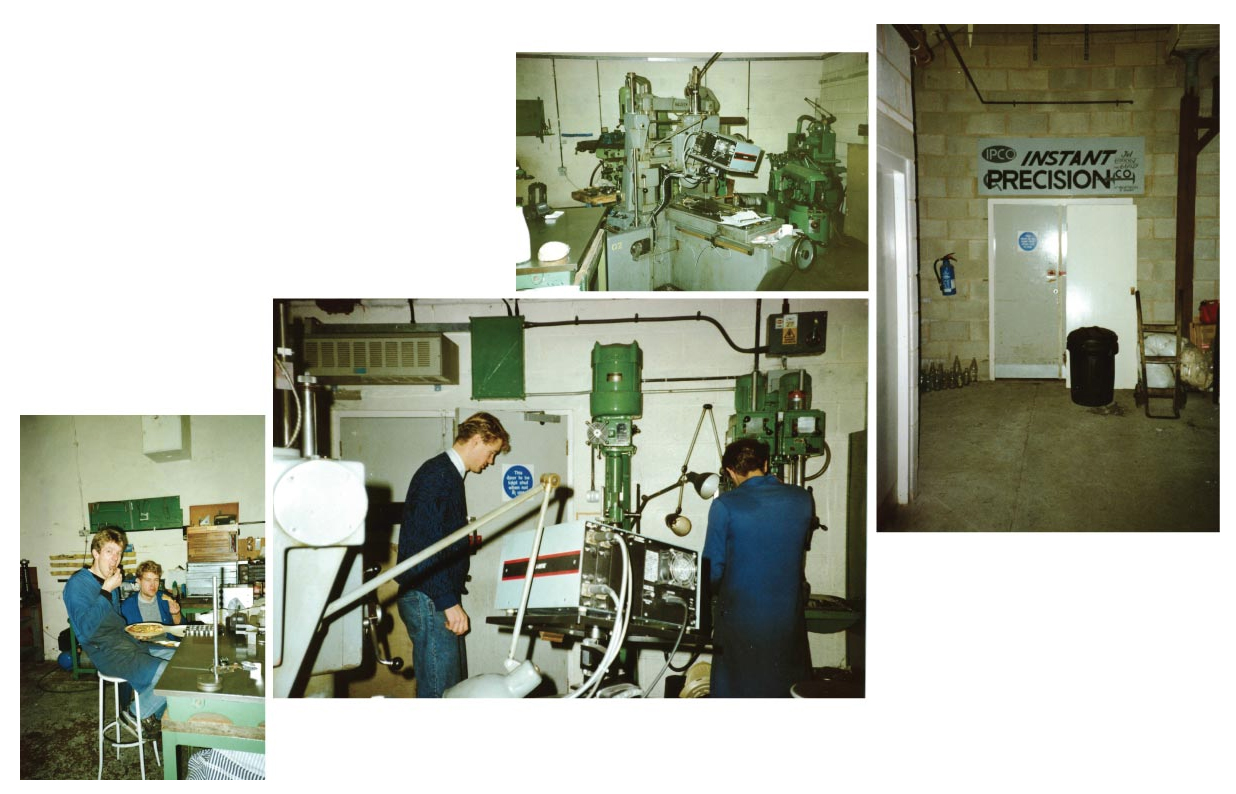 Ian and Simon decide that they’re not happy with the performance of the cantilever brakes on their mountain bikes.
Being engineers and coming from a motorbike trials background, they, along with employee Owen Hardisty, decide to make their own.
The calipers were cable operated and used rear, screw-on hubs on the front of the bike, with the rotor screwed onto them. 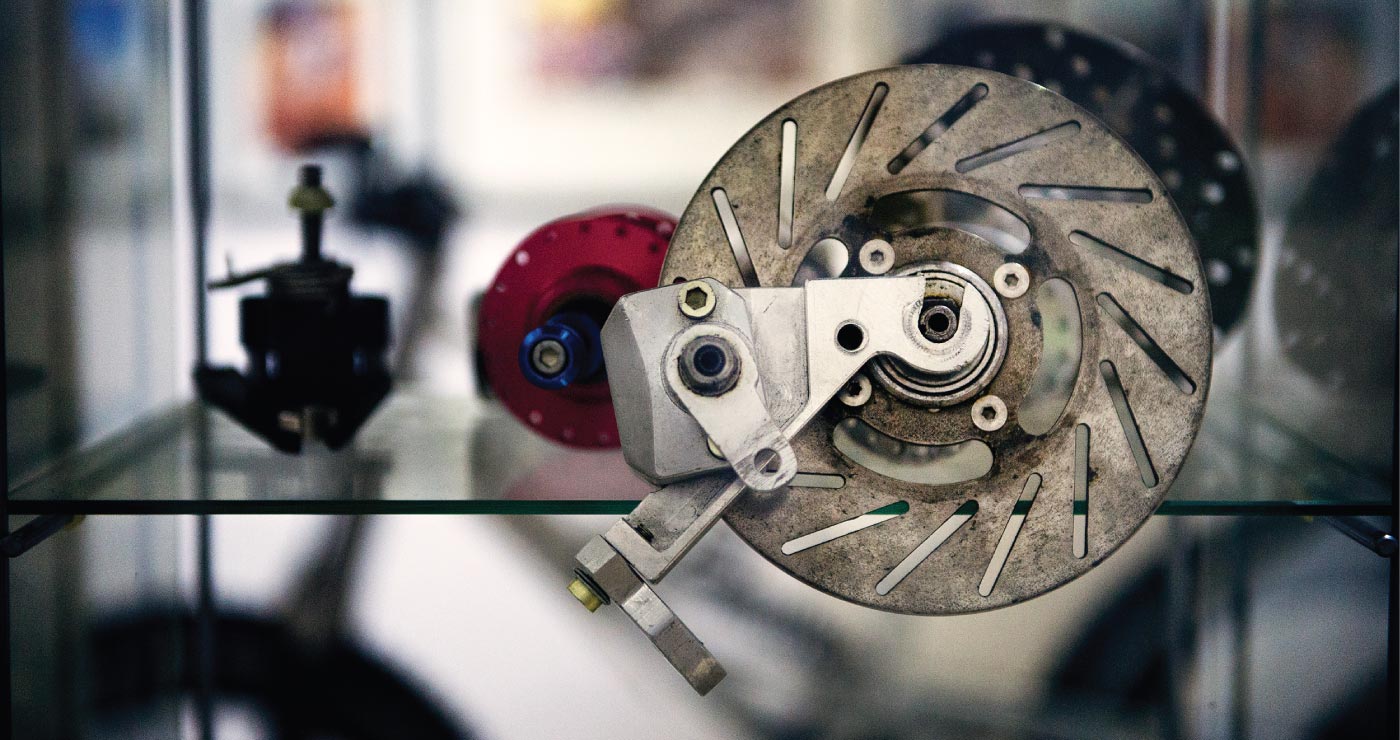 After 2 years of designing and making hubs and brakes for their own and friends use, Hope Technology is formed to make and sell disc brakes and hubs.
The mechanical disc brake was the first product sold to the market.
1991 also saw Hope make its first 6 bolt disc specific hubs fitted with quality sealed cartridge bearings.
The hubs resembled those used on trials motorcycles, but were not the same 6 bolt pattern we are now familiar with.

Interbike, Anaheim, USA – Hope first exhibit their brakes. There were brakes on 14 different show bikes around the halls.
At this point, Hope only had 14 brakes... Hope’s hubs started selling in big numbers in their native UK where US imported products are expensive.
Hope gains a good following for their hubs alone. A satellite office was setup in California to service US sales.
Hope launch the Ti-glide rear hub, one of the first Shimano compatible, after market hubs. It used a titanium central body and titanium cassette carrier.
It was light, strong and looked cool too....

A big investment was made with the purchase of Hope’s first CNC machine. 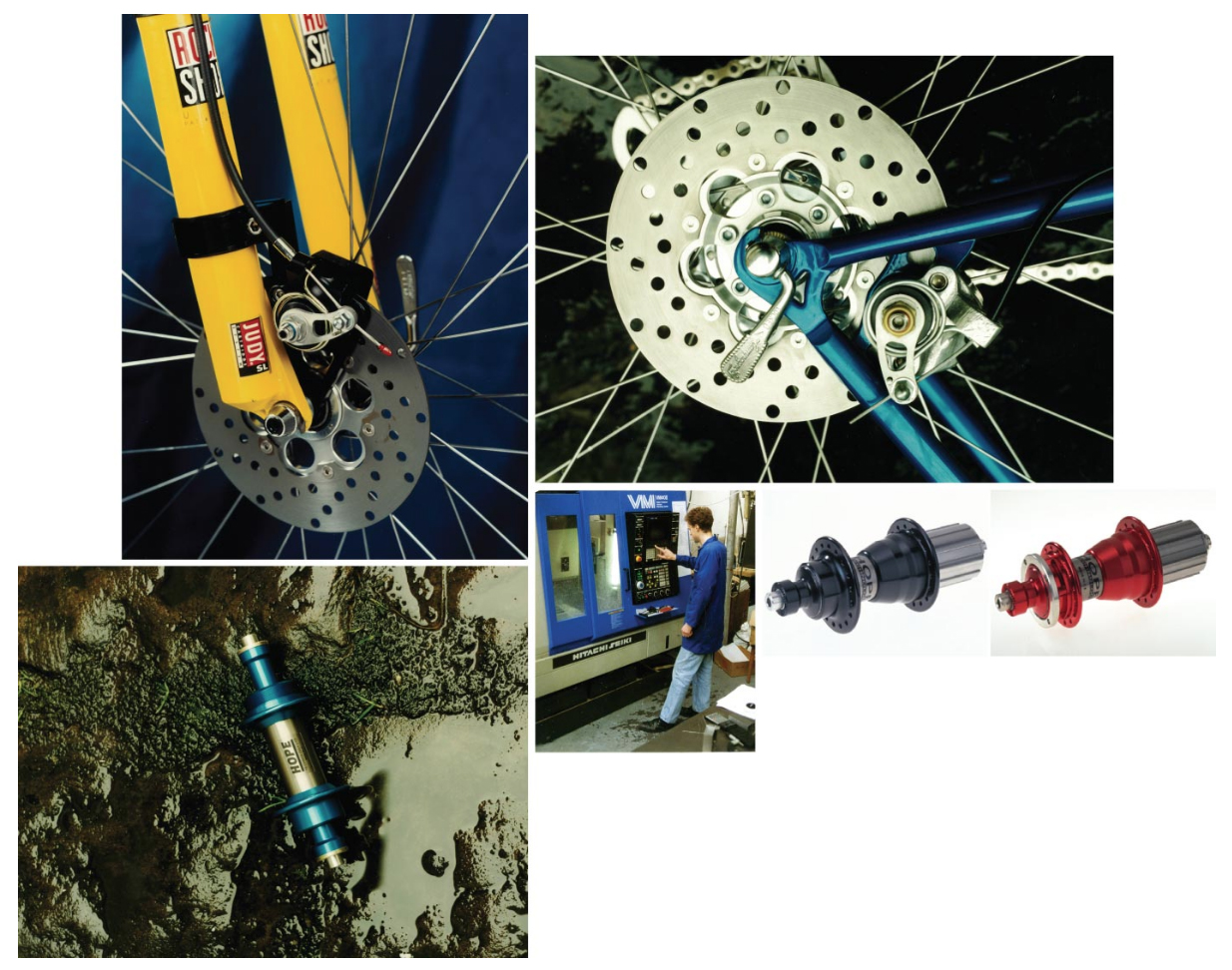 The Ti-glide rear hub was offered in a splined version due to demand from the market for a lighter disc hub. Machined skewers were offered alongside the hubs.

Hope introduces their first hydraulic brake, launched at Eurobike with a concept twin disc system. Production brakes were only available as a single disc.
It was a powerful "open" system fitting to CNC’d fork adaptors at the front and custom braze-ons at the rear.
The Big'un hubset is also introduced. The hub had a 5 bolt disc fitting and used the 3 pawl ratchet system.
The 185mm front disc is introduced for downhill racing. Hope switch to Kevlar reinforced hydraulic hosing. 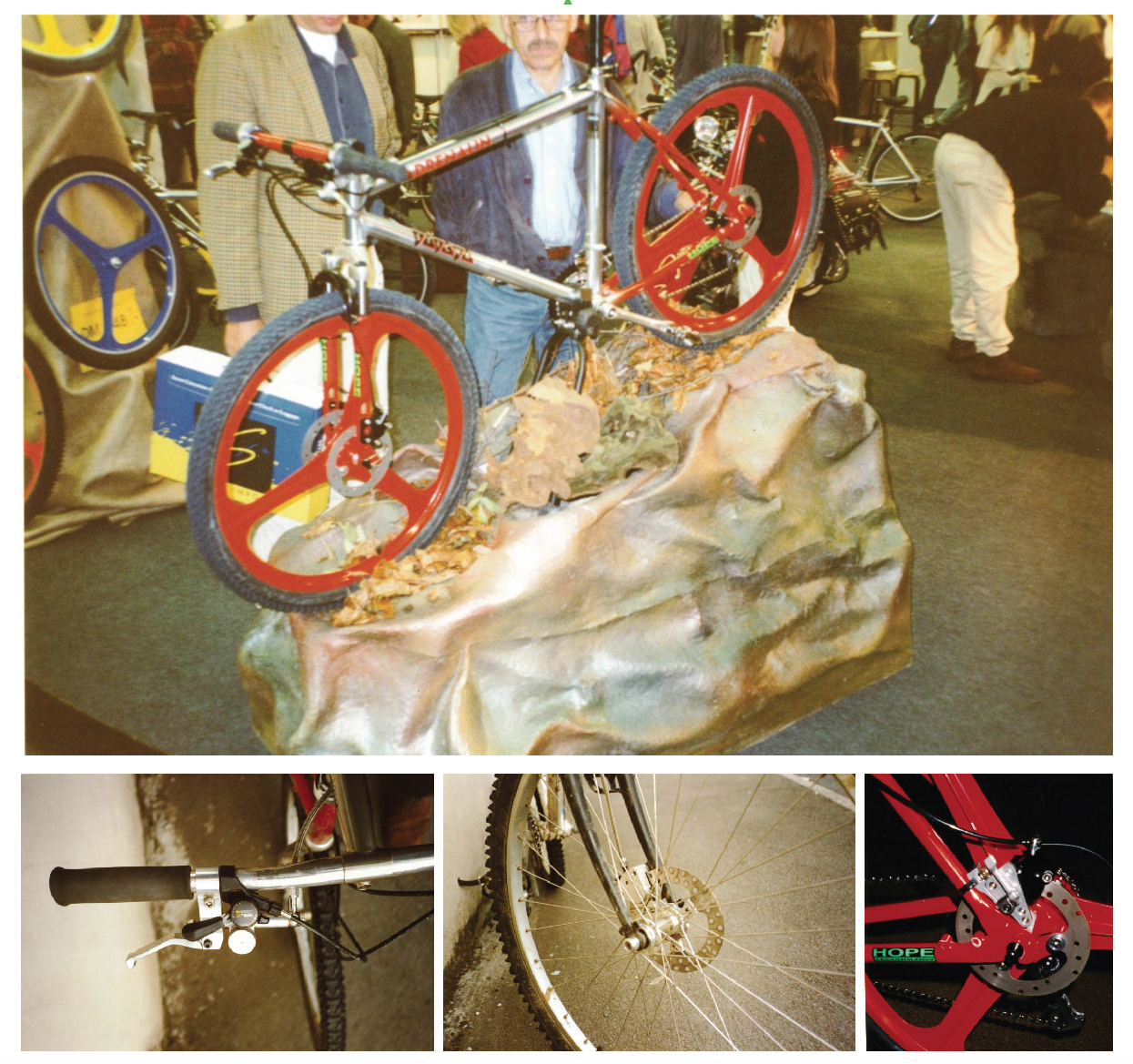 Hope’s Sport lever – with its innovative thumbwheel adjuster is launched to create a completely drag free system – the C2 system was born.
Due to their ease of use, power and mid-race adjustment, many pro riders start using Hope’s hydraulic systems regardless of sponsorship obligations.
Hope have their first Grundig World Cup DH win with Rob Warner winning in the rain of Kaprun.

Ti-bottom brackets were put into production and sold for a mere £90 – bargain at the time!
Co-owner Ian Weatherill and employee Neil Arnold compete in the BCF downhill championships at Fort William, using Lawwill designed Yeti Straight 4 frames and Zzyzx forks designed by Hanebrink with 6" of travel and RockShocks DHO forks.
Hope’s DH4 downhill brake is unveiled at Interbike, Las Vegas – using an open system. The Pro series lever is also introduced. The caliper gets lightened and slimmed down.
Hope’s now Progress Manager, Woody Hole, competes on the international downhill Grundig World Cup scene, clinching some top 30 results on his GT along the way!

Hope expands again trebling the size of the factory with the move from Skelton St, Colne to Skipton Road, Barnoldswick (39,000 sq ft). 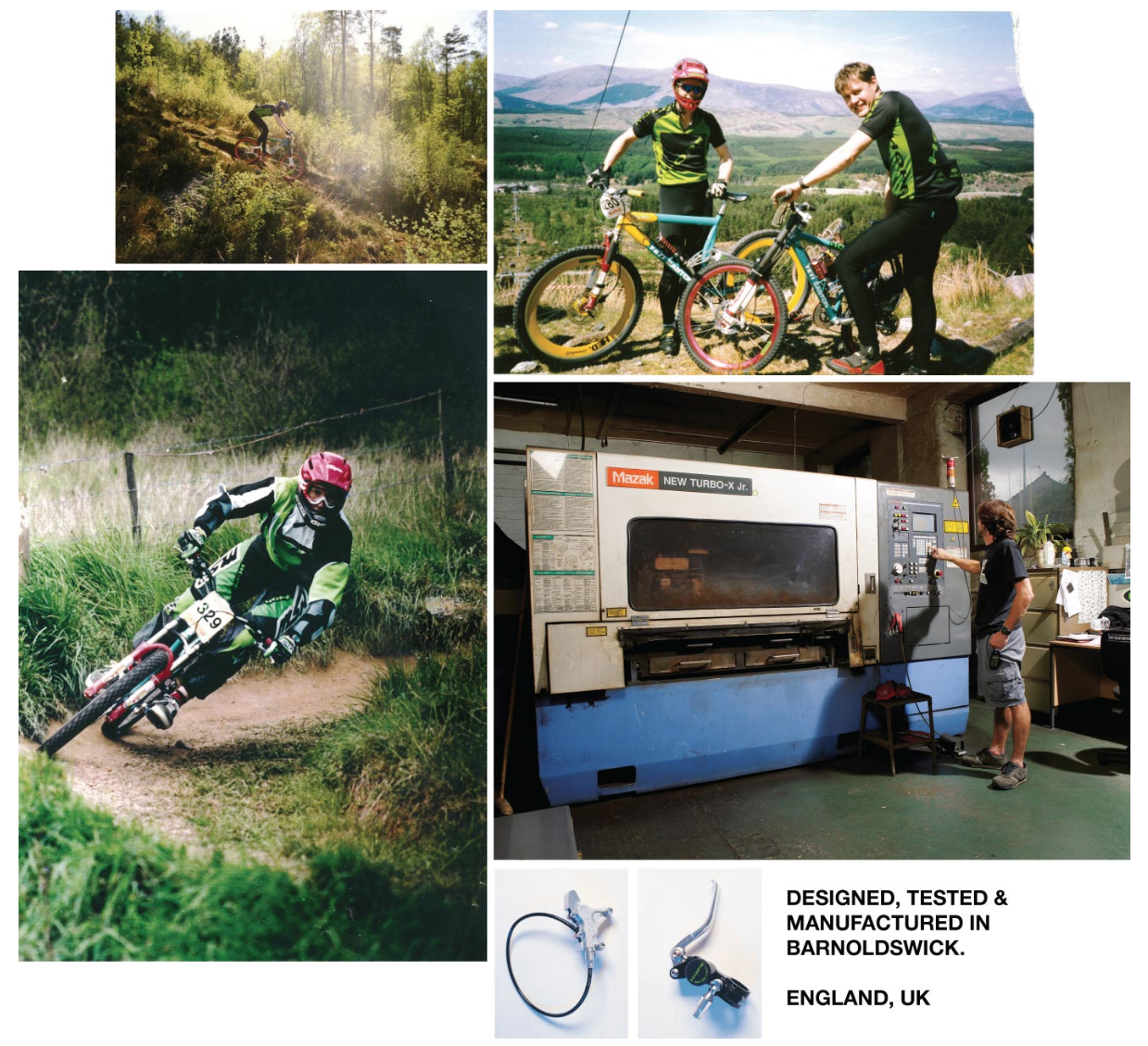 Hope launch the Bulb hubs.
This ﬁrst model had a splined ﬁtting to allow a disc and spider to be ﬁtted.
It became the benchmark front hub due to its versatility in allowing either QR or 20mm axles in the same hub.
After a year of testing on the 1999 World Cup circuit with the likes of GT's then Steve Peat, the Hope 4 pot downhill brake, the DH4, ﬁnally came into production and was offered to the market.